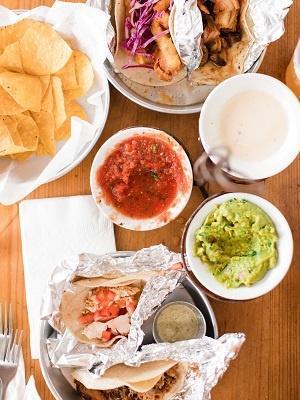 Chido Taco is more than just your typical taco joint – it’s a fast-casual market style taqueria, with the authentic flavor of Mexico in every dish. The business is operated under long-standing, family-owned umbrella Planet Taco Group, which owns 12 restaurants in Eastern NC. When Chido Taco opens, the restaurant will be located inside the beltway in Raleigh. The restaurant will offer bowls, tacos, unique proteins, and will feature a patio bar with a spotlight on mezcal (a popular tequila substitute).

Owner Joel Ibarra grew up inside the family business, starting out as a server and working his way up through the company over the past 20 years. During this period, a boom of Mexican restaurants occurred across the country - and Planet Taco Group recognized the need to think outside the box with their offerings. Joel was looking to evolve and expand upon his passion, and the way he did that was to go back to his childhood roots with a trip to Mexico. He visited taco stands in the plazas and saw a vision for the future – through the traditions of his past. Here, the idea for Chido Taco was born. For Joel, “Chido Taco represents the future for the market and for ourselves. It reflects the collective passion for authentic, street-style tacos.”

Even though Joel owns multiple restaurants, Chido Taco was the first SBA loan for Planet Taco Group. To begin this process, Joel was introduced to Business Development Officer Michael Byers. Michael’s expertise in SBA lending led to a successful closing on this deal.

Joel had the following to say about working with Michael:

Michael kept it simple – he guided me through the SBA loan process from the very beginning. He was friendly, realistic, upfront, and direct, which was very appreciated. He was always there for me – I felt his support the whole time. The SBA loan itself was expectedly tedious because there are multiple components involved, but it was laid out in a way that made sense. Michael and his colleagues worked together very well – they were always very patient and pleasant. I would recommend FNB Small Business Finance without hesitation to anyone looking to start, buy, or grow their business.

Chido Taco is scheduled to open in July 2019. We are looking forward to seeing this business in action in the coming months and years!