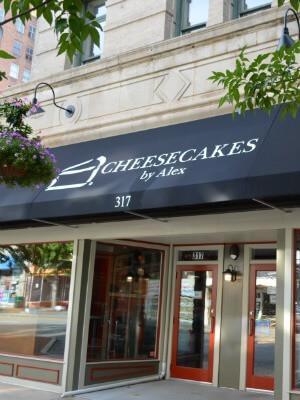 Alex Amoroso made his first cheesecake on a whim, to satisfy a sweet tooth. It didn’t turn out the way he’d hoped – which encouraged him to keep trying. After months of testing out new cheesecakes on his family and friends, he discovered the recipe that was delicious and had the potential to be enjoyable to the general public. In December 2002, Alex opened his bakery called Cheesecakes by Alex in Greensboro, NC and a local legend was born.

Cheesecakes by Alex thrived from the get-go. It was a word-of-mouth phenomenon in the Greensboro area, generating sales that almost immediately called for more working space. In 2004, the business expanded utilizing unused space within their building - which led to extended operating hours, an expanded product line and more efficient operations. The company continued to grow, and from that point on, the total revenue of Cheesecakes by Alex increased by 144%. This led to a need for a major expansion – that’s where FNB Small Business Finance comes in.

Alex had all but closed on a loan in 2014 for the business expansion when his previous lender told him that they would not be able to finalize it. The news was a low blow, but Alex was determined not to give up on his vision. He went in search of other options and was referred to our team at FNB Small Business Finance. We knew right away that Alex was moving his business in the right direction and were determined to help. In 2015, the SBA 7(a) expansion loan for Cheesecakes by Alex was completed, thanks to our expertise and ability to get the deal done.

Mr. Amoroso had this to say about his experience working with our team:

At the time I was introduced to FNB Small Business Finance, I was at the end of my ropes trying, as a small business, to get funding for an expansion that I was convinced would move my business forward. By the end of my first meeting with the team, they was also convinced that we were poised to move ahead and get it done. My first thought was, ‘Ok, this is just another promise from another banker,’ but boy was I wrong! FNB Small Business Finance literally took the bull by the horns and moved forward with such conviction that they actually reinvigorated me on the expansion. They moved us through the process and explained each move as we navigated the mountains of paperwork involved with SBA lending right to the closing table. Without the team at FNB Small Business Finance, I really don’t know where our business would be today. They are a big part of the success of our business and in the future, we will be sure to have them involved with each new growth opportunity our business has.

Since the SBA loan closed in 2015, Cheesecakes by Alex has moved into the larger space next door. The business now has 4 times the kitchen space, so that the staff can accommodate the flood of orders in-store and online. The expansion also allowed for extended dining room and patio seating for his customers. The future is bright for CbA, and we can’t wait to see what happens next!

To learn more about acquiring an SBA loan to meet your company’s needs, contact us today at 855-935-6722 or Visit Our Team Page.