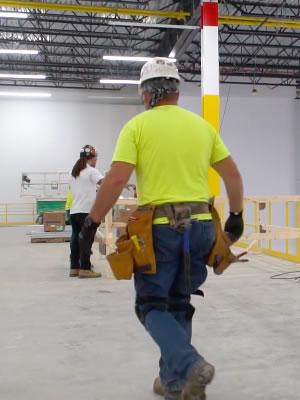 Located in Cleveland, Ohio, AKA Team is a contracting firm specializing in building waterproofing. Their number one objective is to protect buildings from water penetration. This includes services such as thermal moisture protections, paver systems, green roofs – anything you can think of that keeps water out of the buildings. Some of the major projects that AKA Team is focused on are in the healthcare space. Some names in their project portfolio include Cleveland Clinic, Cleveland State University, and Cuyahoga Community College, to name a few.

Ariane Kirkpatrick always knew she would be an entrepreneur. She has owned other businesses before, but at one point on her life, she joined the field of construction. One of her favorite books to read was the Ohio building code book – more than magazines or fiction novels, this was her bedtime reading. Then in 2014, she decided to marry the two – and she started her own construction company under the mentorship of the owners of Donley's Construction. This was the beginning of her legacy – The AKA Team was born.

Growth happened very quickly (and a little unexpectedly – in a good way!) for AKA Team. Before she knew it, four years after starting the company, Ariane was ready to take the reins over from Donley’s. She approached her mentors, and after talks of a few different options, Ariane decided that she wanted to be 100% owner of AKA Team immediately. That’s when the talks with First National Bank began.

Tim Carson helped facilitate this transaction so that Ariane could acquire AKA Team from her mentors at Donley’s. The deal closed in a very timely manner – ahead of schedule – and Ariane became sole owner of her company in 2018. Here’s what she had to say about working with Tim Carson and the team at FNB Small Business Finance.

Not only would I recommend Tim Carson and First National Bank to others – I already have. Tim was knowledgeable, understanding, and available – he even answered the phone one evening after hours when he was cooking dinner! That’s dedication. It’s a great relationship and partnership.

The AKA Team has been under sole ownership of Ariane Kirkpatrick for almost a year – and the company is doing great. Tim and Ariane continue to be in touch with each other on a regular basis. We wish this company the best and look forward to continuing our great partnership!